Via @SonnyBunch, check out the box-office chart from this weekend thirty years ago: 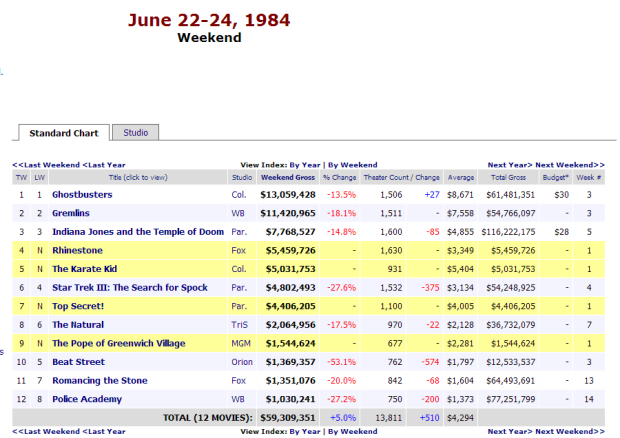 Yeah, I know, Rhinestone.  And few Star Trek fans would put Search for Spock at the top of their lists.  But any summer with Ghostbusters, Gremlins, Temple of Doom, the original Karate Kid and Top Secret! would rank as a particularly great blockbuster season under any circumstances.   (Also, The Natural, which I’m sad to admit I’ve never seen.) These were all playing at the same time – not to mention spring holdovers Romancing the Stone and the best Police Academy movie without Bobcat Goldthwait.

Things did cool off considerably in July, 1984, but a few more classics, near-classics and childhood favorites came out that month: The Last Starfighter, Purple Rain, Revenge of the Nerds (a true word-of-mouth hit that didn’t even debut in the top ten), Bachelor Party and The Muppets Take Manhattan.

August, traditionally a dumping ground, was pretty barren – Clint Eastwood’s Tightrope was biggest opener. But my theory is that one particular movie released in August, 1984, was so intimidating that all the other studios let it have the month:

I had a weird dream once that they remade Red Dawn with North Koreans instead of Russians, and starting the guy who played Thor or his brother or something. Must have been something I ate.