In an interview with Rich Eisen, the great Ed O’Neill talked about how he got his breakout role on Married With Children by portraying Al Bundy not as angry and outraged by his family’s antics, but as a resigned loser who was past the point of caring:

Yesterday it was revealed that the President of the United States and his family were running a charity scam for years, and that legal threats have forced them to shut it down:

President Donald Trump’s personal charitable foundation has agreed to dissolve under judicial supervision amid an ongoing lawsuit concerning its finances, according to a document filed Tuesday in Manhattan Supreme Court by the New York state Attorney General’s office.

The dissolution of the Donald J. Trump Foundation resolves one element of the attorney general’s civil lawsuit against the foundation, which includes claims that the President and his three eldest children — Don Jr., Ivanka and Eric — violated campaign-finance laws and abused its tax-exempt status. Rather than operating it as a genuine charity, the lawsuit alleges, they instead allowed it to be used “as little more than a checkbook to serve Mr. Trump’s business and political interests.”

The suit, filed in June, alleges that Trump and his children violated federal and state charities law with a “persistent” pattern of conduct that included unlawful coordination with the 2016 Trump presidential campaign.

Central to the lawsuit is a nationally televised charity fundraiser for military veterans that Trump held in Des Moines, Iowa, on January 28, 2016, just ahead of the Republican caucus vote there. The foundation received $2.8 million as a result of that event. According to the New York suit, Trump campaign staff then directed the disbursement of those funds for Trump’s political benefit.

The lawsuit also alleges that Trump mined his charity for “personal enrichment,” including using $100,000 from the nonprofit to settle legal claims against his Mar-a-Lago resort in Palm Beach, Florida.

Imagine if this had come up with Obama, or Clinton, or either of the Bushes in the White House.  It would be a scandal the likes of which Washington had never seen.  Public outrage would force the President to resign in disgrace.

For this President, it’s barely a blip on the radar: 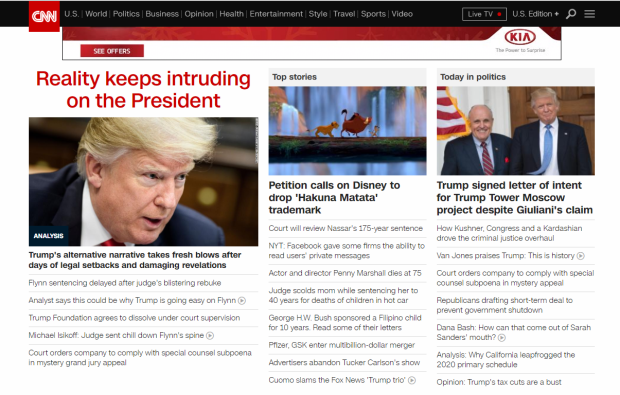 Again: the President of the United States ran a phony charity for his own benefit, and it’s little more than an afterthought compared to other stories about Trump-related scandals, corruption and investigations.  A sentencing hearing for his former National Security Advisor, whom the Judge basically accused of actual treason, bumped it to little more than a footnote.

While he was running for President, Trump famously said he could shoot someone on Fifth Avenue and not lose any of his supporters.  He hasn’t personally killed anyone yet, but our ability to be shocked has certainly taken a hit.